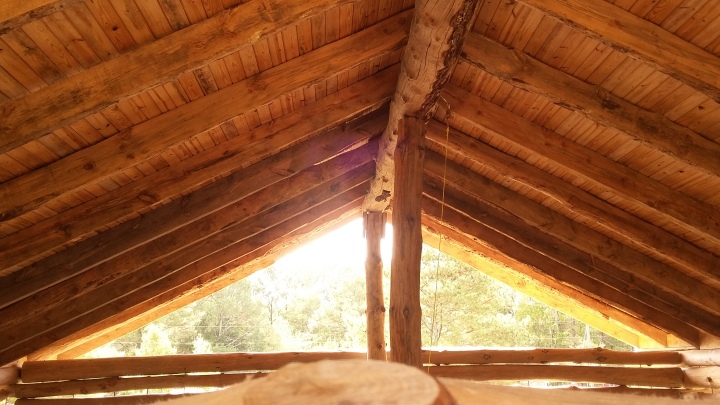 I know you guys are all excited for me to finish the house, but we are low on funds at this point, so we are working on projects that don’t take a lot of money, but do take a lot of time. Hang with me, I’ll get there……

Now that we are under roof, the logs will stay nearly dry forever (we hardly ever get sideways rain here in the South), which means we need to borate them one last time. We’ve only done two things to the logs since we cut them down- peel them and borate them. I’ve written about the peeling and borating in the past. According to Skip, the man behind the LHBA Butt & Pass method, that’s all that needs to be done. Gray weathered logs are not a problem with the LHBA style, due to the large roof overhangs and the borate. But gray logs are ugly in my opinion, and my wife and neighbors agree. So, in anticipation of borating and staining the logs one last time, I pressure washed them. Some still had bark that I missed while peeling, and all of them had chunks of dirt from being dragged over to the building site. They really needed a good cleaning.

There are actually two ways to clean the logs- wet (pressure washing), or dry (corn cob blasting or with sand or glass media). The dry method involves renting a machine, buying a bunch of crushed corncobs, and spraying the thing. That costs lots of money. The pressure washing just requires a pressure washer, and about “4,000 gallons of water”, according to a frantic call from our utility company, ha ha…!

The problem with pressure washing, I found out, is the fuzz that is left over afterwards. It’s a gloppy paper-like residue that sticks to the logs- really, it’s just the sun-burnt or bleached  outermost layer of logs I sprayed off. You need to get it off the logs before borating or staining – otherwise, it will soak up the stain and borate and waste your money. And it looks ugly anyway.

It’s surprising (not surprising) that there aren’t better methods to get the fuzz off (I know- corncob blasting is the method)….But seriously- you’d think there would be a cheap attachment that you can stick on a drill and brush the logs with. (Sorry, I’m not doing this by hand). But no – there are expensive attachments, but I couldn’t find cheap ones. And a drill is not made for cleaning the fuzz off of 6400 sq ft+ of logs. In defense of the expensive attachments, Slamasha reports it working very well, and he’s happy with the results from his $99 nylon cup brush that attaches to a power buffer, like the kind of buffer you use to wax your car.

I kept researching and found a nylon bristle brush for $20. That sounded much better. 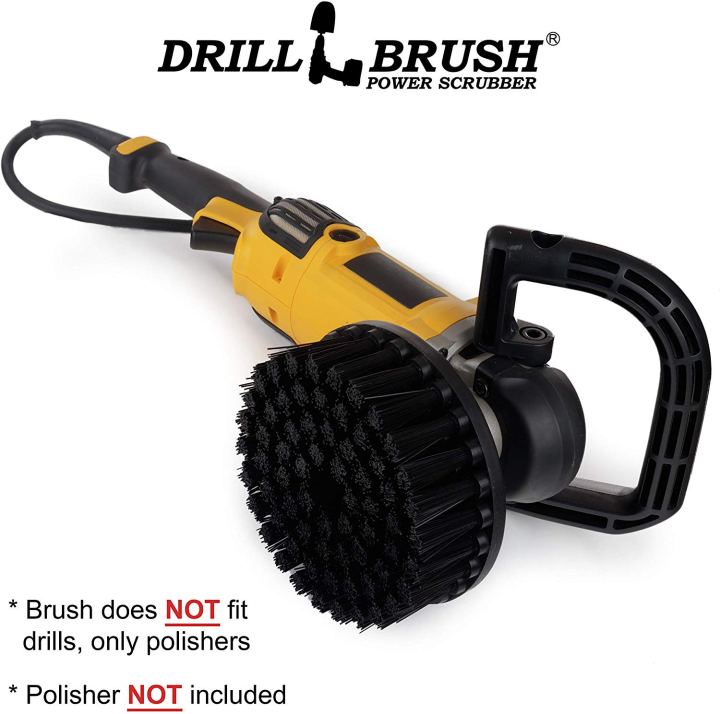 Why nylon? Why not sandpaper or wire brushes? Well, I tried sandpaper on an inconspicuous part of a log – and it scratched up the logs. The wire brush was worse.

I also tried green scrubber scotchbrite pads – the kind you use on that 9×13 lasagna baking dish. mmmm….Lasagna….Sorry- the scotchbrite pads hold up well- except when you get close to a knot or a sliver- then they get destroyed.

Plus the idea is to buff the logs, not sand them- they are already pretty smooth.

Unfortunately, our logs sitting out on racks for a year attracted carpenter bees. The borate doesn’t help in that situation because the bees don’t actually ingest the wood, therefore, the poison doesn’t hurt them. However, I found a few helpful websites that claim to know how to get rid of the bees. Here are some of the suggestions:

It is a very time consuming, but necessary step. And with the sudden cold weather blast we just had, this is putting a lot of our progress on hold, as we can’t apply stain if the temperature is less than 50.

Lots of debate here. But what I found was stain is made for specific things- you shouldn’t use deck stain on a log house, according to most manufacturers – something about stretching and peeling. Some folks think that is bunk, but I think I’ll go with the specialized product on this one.  There is also oil based and water based stains. We like the idea of an odor-free home that isn’t off-gassing dangerous smells, so we looked at water based stains, which have come a long way in the last 20 years.

We settled on a company called Sashco. I checked their website for dealers in my area, and found one nearby. I called them for samples, and received them the very next day. We read the literature, which was mostly advice for kit log home owners, and went outside and stained a log to see if we liked the colors.

I can’t tell the difference between the two colors, but it does look nicer stained.

On the inside, Sashco doesn’t recommend staining the logs, but instead recommends just putting a nice clear coat on them. From what I’ve heard from other LHBA members, the natural look on the inside makes the build go faster, but dust tends to settle on the logs and is really hard to remove- you can’t just wipe them down. The clear coat helps with dusting.

That’s all for now!