I’ve written a bunch about how we are building this cabin, but not much lately on why we are building this thing. Since we are at a point between the first and second floors, and I’m back to peeling logs (more on that later), now seemed like a good time to review. Not only do people use widely varying methods of building a log cabin, but they have widely varying reasons for building a log cabin. Talking to other LHBA members and other builders on facebook, I’ve discovered that not everyone is going to live there full time. The reasons for building also vary.  You could slice the reasons and the types of people who build into a crazy number of categories, but I’ll try to keep it simple.

I did an informal poll on one of the cabin groups I’m on to see why people build log cabins. 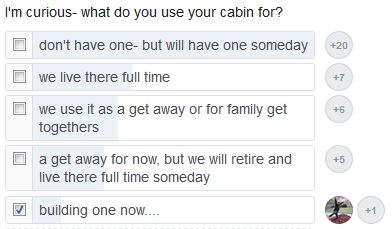 It breaks down this way:

Half of the people on the survey don’t have a log cabin, but say they will someday. I believe that is probably true of the general population of the United States, as well. I found this article from the National Park Service stating that originally, log cabins in America were meant to be temporary dwellings, and they may have lost popularity completely, except that in the 1930’s, the Civilian Conservation Corps (part of a “make work” project during the Great Depression) built many cabins in the National Parks. The most famous example of log architecture is, of course, the Old Faithful Inn in Yellowstone National Park, Wyoming. I’ve been there many times, enjoyed sitting in one of the mission style chairs in the lobby, and climbing the log staircases. It is truly an inspiring structure. A photo that captures all of the essence of this world-famous structure is hard to find, but I found a few:

But what is the allure of a log cabin? The National Park Service article states:

Had it not been for these [the log cabins built by the CCC in the 1930’s] the log cabin might have disappeared, but because people saw the log structures and liked what they saw, many began to build modern log cabins and log houses. These homes seemed to represent all that a family could want: a sturdy shelter from the elements and a simple, self-sufficient lifestyle. The log cabin remains a popular building style.

Popular, but yet rare. There are no statistics on how many log cabins are out there, but they remain a very popular (at least in the imagination) and an iconic building style. I think the answer to “why are they so alluring” is simply because they call us back to simpler times when quality mattered.

For most folks, the cost of building one is the limiting factor. Whereas a normal frame home costs about $120 per square foot, a log home can cost $150-$175 per square foot. But that’s really not that much difference for a dream. Hard to get a loan? Maybe a little. Cabins are considered unconventional building styles by many lenders- meaning they are hard to find “comparables” (other property in the area used to determine if the asking price is valid). Maybe permits and city inspections are more complicated? Yeah. But not by much, depending on where you live. Of course, this doesn’t cover our build. Our “per square foot” cost is much, much cheaper- about $20 per square foot. In our case, a log cabin was cheaper than a framed or a brick home.  One reason is that the building materials can be cheaper than 2×4’s. As in free. Or, the cabin can be extremely expensive if you hire out the actual construction and contracting. But I guess you could also argue it’s only cheap because I’m pouring 30 years worth of work into building it in about 2 years. Maybe 3….

It’s always seemed strange to me that everyone loves the idea of a cabin in the woods, but not many people have them, even though price, hassle, etc. isn’t much different from a regular home, not to mention how much more environmentally friendly they can be than other styles of homes. I just haven’t been able to square why there aren’t more of them.

According to my poll, people have different uses for their cabin. Some live in them full time, others use them as a get away. Why have one?

The first cabin I had was definitely a get away- we drew a circle on a map with our full-time residence as the center. The edge of the circle was how far we were wiling to drive to “get away”: which was a two hour drive. Then, every weekend, we would take a different route until we were 2 hours away from home, looking for property or a cabin for sale along the way. The one we bought was built by an old farrier in his 70’s- as a get away on 20 acres. No power, no running water, too far away from cell coverage, and an outhouse. It was a simple one room cabin with a loft. And it was awesome- I could sit out on the porch some days and actually hear the nothing. At night, we were at least 60 miles from the nearest city, so the stars were extremely bright. But at 6,000 ft+ elevation, it wasn’t a place you could stay in the winter, as the county would close the road when the snow got too deep. We had a few family parties there, but eventually found that keeping up with two houses was some work. After the divorce, I had to sell it. That was painful, and I realized that I really liked cabin living better than city living. I wanted to get another one, and this time, live in it full-time.

This is where I’m headed. But when I remarried and moved to the South, it didn’t look like it was going to happen. My wife wasn’t that interested at first. A brick home was what she wanted. I was ok with that, I thought, so when I finally got through school and started making a little more money, we started looking at homes. We needed a big one- 6 kids between the two of us, and we both have lots of hobbies- sewing, knitting, art, music, woodworking- we needed plenty of space. Of course, I wanted as much property as we could afford. Which meant very few homes made it on the list, and the ones that did were usually in need of major renovations, and many of them had plenty of smells to go along with them. You can read more about the beginning of our log home journey here.

Now they do have cabins here in the South- but not like the ones out West. Here we have dove tailed square oak beam cabins. Out West, it’s more solid log coped cabins. They are ALL pretty in my book.

The eventual plan is to have a small hobby farm, and of course I want my garage for woodworking and building rustic furniture. The idea is to become more self-sufficient. We are building this cabin without a loan, paying as we go. There’s no mortgage on the house- when we’re done, we’ll own it. We’ll try gardening, and raising chickens and bees. Maybe some of that will provide some income. When you’re peeling logs, it’s easier and more fun to think about this kind of stuff than how sore and tired you are from all the work.

Which brings me back to peeling logs, which I did almost all of last week. See, when we started stacking, we decided that we were going to stack logs in this manner: the biggest logs would go on the bottom, and decrease in size as we worked our way to the top. That way, even though our logs have more taper than anyone else’s home on LHBA, at least we would have control over the size of the logs. We also decided to stack so that the butts of the logs faced the front of the home- this gives the home a “massive” feel to it, and also provides extra support for the roof – which hangs about 6 feet out from the corners.

There were still some trees on our property that needed to come down, and as we got higher with the stacking, I noticed that  few were too close for comfort to the house (in case of a tornado). So I cut a few down. Julie measured them, and what do you know- they were the same size (about 5 feet around) as the ones we were using on layer #6- which meant we needed to use them now, or risk stacking big logs on top of little logs. I cut down about 8 more of that size.

I also cut down a sweet gum tree that is about 55 feet long, has a 29″ diameter base, and a 15″ tip, and is almost perfectly straight with no large branches. In other words, the perfect size for a ridge pole – the longest, straightest, biggest, “most righteous” log. But I’ve heard from folks that they twist as they dry. I can’t even budge it with my tractor. If I don’t use it for a ridge pole, it would make an awesome dining table, along with some end tables, and maybe a door.

The other choice for my ridge pole is a giant oak further back in the forest- it’s about 26″ at the base, with minimal taper. I don’t know the tip diameter, but it is even longer- almost 65 feet by my estimation. And according to woodweb (they have a weight calculator), it probably weighs about 7,000 lbs.  I’ll need help moving it. Did I mention it’s an oak tree? How awesome would that be for a ridgepole?

That’s it for now, back to work. Leave a comment if it suits you.