What is a Built Up Roof? 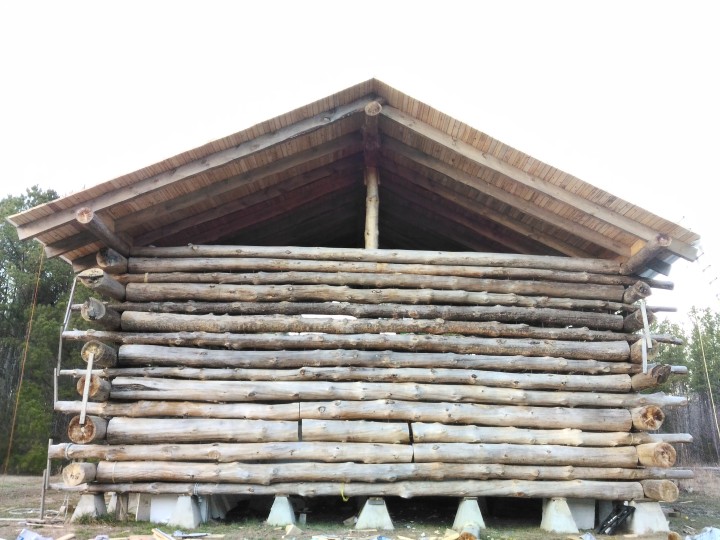 This style of roof is also known as a cathedral roof or ceiling. But the simplest answer is a built up roof is a roof where the insulation is on top of what you see from the inside – different from a roof where the insulation is inside and below the roof. A log home can be built with a conventional roof, but nobody wants to walk into a log home and look up to a white dry wall ceiling. Besides, according to a lot of folks who’ve done both styles- the built up roof is only a little more expensive, and it can be argued that it’s even less expensive if you are doing your own labor, if you consider the amount of work to install bats on the inside of the home rather than the top of the roof.

Materials for this roof

The roof of my butt & pass log home starts with three RPSL’s (Ridge Pole Support Logs), which sit on three 18″x36″ piers that have a six foot square base, buried three feet in the ground. I estimate these piers to be able to support 50,000 lbs each, although the roof will probably only weigh about 70,000 lbs total.

5″x12″x27.5′ rafters spaced 4 feet apart rest on the walls and the Ridge Pole, spiked with rebar at their attachment points.

2″x6″ tongue and groove (T&G) decking are nailed to the rafters, with 8′ of overhang past the walls of the home at the gable ends, and 4′ of overhang on the eaves.

A synthetic underlayment goes over the top of the decking.

2″x10″ sleepers form a box frame around the solid foam insulation, but only on the insulated portion of the home.  They are spaced every 4′.  Outside of the home, on the overhang areas, shingles are applied to the underlayment, along with a drip edge and soffits.

On top of the insulation is plywood decking, tar paper, and then shingles.

Eventually, we’ll do a metal roof, but I really like the idea that for now my roof will be protected by plywood and shingles, where, if we just did metal, we could forget the plywood, and just screw the metal directly through the foam and into the rafters and decking. That extra umph from the plywood and shingles gives me some peace of mind.

When you buy used….

I’ve scoured craigslist for insulation for almost a year, and finally got a hit from a guy removing insulation from a senior retirement complex and selling it for $6 for a full sheet. I rented a U-Haul, attached my trailer, and stuffed that thing to the gills with as much foam as I could get in there – which was only $400 worth of foam. I hired my step-son Arthur to help on his day off, and it was a smart move- he worked hard and we had no problems on the road.

With all that, I think I have enough. Alabama requires roof insulation to be R30 or better. The manufacturer of the foam I bought claims R-value of 4.6 / inch. So, an 8″ thick sheet would have an R-value of 8 x 4.6 = R36.8. I wanted to get to R50, but would need bigger sleepers, a ton more foam, and it just wasn’t worth it. Besides, my wife doesn’t like the roof any thicker than it has to be, so 8″ thick it is.

At first, I was worried about the foam because it slopes by about 0.75″ – 1″, due to the way the previous roofer installed it on the retirement home, so I set up my foam cutter to slice the foam flat. Here’s a video of that.

Later, I decided that since I only need to meet or beat R-30, having all the pieces perfectly flat isn’t all that important, as long as I get to 8″, I’ll be fine. More important is that the foam is four feet wide, and the sleepers are spaced four feet apart on center. This means I had to cut 1.5″ off the foam to make it fit in between the sleepers. Some folks used a saw, but that is messy. I wanted something better, so I turned the foam cutter on its side and used it to slice off 1.5″. I used a borrowed Rheostat transformer from my buddy, Ellery. Here it is in action again.

I also got the lumber, used, from a local guy….who said he was going to use it to build a cabin, but had too many other projects on his plate. We talked for a good hour at his house- he informed me that I could get a residential builders license just by taking a test and paying a fee. I’ve always thought to become a General Contractor, you had to work for a General Contractor for two years, but they are not the same thing. So now, I’m thinking about this idea……

I put the decking on the roof, knowing that I was going to come back later and trim up the ends of it. Turned out to be very scary and took a lot of motivation to get up there and cut it. I originally thought that I would have to “square the roof” to make it look right, but my buddy Ronnie said, “any thought of making the roof square should’ve gone out the window when you started building with logs.”  I think he’s right- my logs are crooked, the Ridge Pole has a slight bow in it, the RPSL’s are no better, the cap logs are off, the rafters are homemade- nothing lines up, so….If I go off and have this perfectly square roof sitting up there, it’ll look cock-eyed from the ground when compared to the rest of the house. What I ended up doing was following Ronnie’s advice: just snap a chalk line about 2.5′ from the last rafter (the one that sticks out the farthest), and run a skilsaw up the edge.

As a one man show with no man-lift, I made a tool out of rebar that I could slip over the end of the decking to “feel” where the rafter was, and then use that as a reference to snap the chalk line.

Here’s a video of me with the tool I made to help line up my cuts.

Cutting with the skill saw on the edge of the roof, and knowing that the saw could jump out of my hand at any moment, thirty feet in the air- it was all quite unnerving. I tied on, and also used one hand to hold the rope while I ran the saw with the other hand. I think it turned out great, and I’m the only one who can see the little wobbles here and there (they are not that bad, I’m just saying I know there are some ;).

I build a shingle elevator to get everything up on the roof. I need to get the 2×10’s up there, set them at 4′ apart, then screw them to the roof. I need to frame all around them and inside so I have a place to screw the plywood to that will sit atop the foam insulation. But I need quite a few days of dry weather to make sure the foam doesn’t get wet.