Why a triple block? Why not a double? or a single?

Because two triple blocks working together gives you a 7:1 mechanical advantage- 5,000 lb log requires only ~720 lbs of force to lift. And you can use just 5/8″ thick rope to lift 720 lbs. A double block would only reduce the force down to 1,250 lb. But you have to double that- for each end of the log. And a single……ummmmm…..there’s no mechanical advantage to a single. Stop talking about single pulleys. On the other end, a “quadruple” block doesn’t really exist beyond huge construction cranes with wire rope- from what I’ve seen and read, anything more than three pulleys and the friction increases beyond the efficiency gained. So, a triple block it is.

First, I looked online. And found…..not quite nothing, but almost. It’s unbelievable in this age of Amazon and Ebay that you can’t find a triple block with more than 3,000 pound capacity. I suppose not many people are lifting heavy objects by hand. Ok, you can find them, but they are insanely expensive, and you need two to make a set. Not to mention you need four sets to work efficiently. Look at that price:

I mean, I guess you could climb a 30-foot lifting pole and change the block and tackle out every time you want to lift a log, but you would still need four pulleys- two on each pole- to lift each log. So, it would cost you $1,300, plus rope (about $300).

This calls for a cheaper solution: 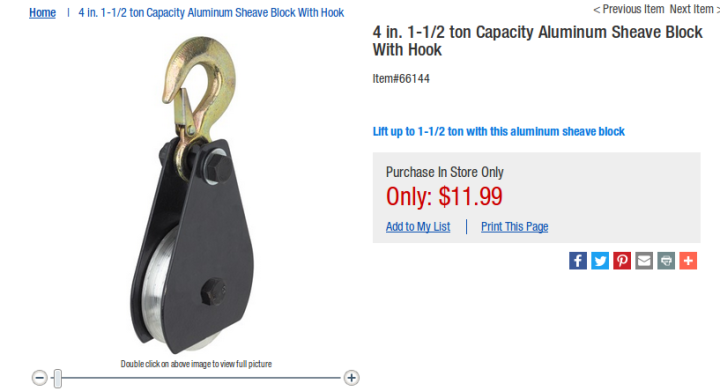 Here’s what I came up with:

Some more notes: I needed somewhere to tie the end of the rope- on the antique pulleys, there’s a place called a becket

. I didn’t have one, so I took two extra plates from a single pulley, and put a bolt through them.

I just finished lifting the biggest log yet- over 6 feet around at the base, and 50+ feet long- I figure it weighs around 6,000 lbs. The pulley held just fine- in fact, it held better than the #6 triples that I had on the opposite end. The singles (on the box) were originally rated for 3,000 lbs, so I figure the modified triple is worth at least that much, but with that huge log, probably more like 4,000 lbs.